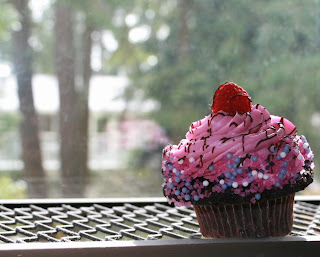 A beautiful cupcake. From Whole Foods. It tastes bleeh. Who would have thought that Whole Foods would make their frosting out of shortening? At leasts that's what it tastes like. Shortening, sugar and food colouring. Yuck. 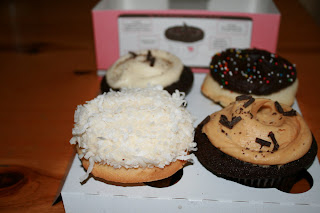 Cupcake Royale Cupcakes. O.M.G. So, so, so good. The frosting is most definitely buttercream. And there are cream cheese based frostings too. Yum. The cupcakes were a little bit like cake mix texture (I think the denser texture seems more homemade, though I don't doubt that Cupcake Royale cupcakes are handcrafted without mixes). We took Elinor there yesterday for our first visit. We drove back into Seattle today for me to get my eyebrows threaded, pick up some art supplies for ARTFEST! and oh, while we're here let's go back to Cupcake Royale! I picked out the Salted Caramel again. And tried Coconut on White. C picked Chocolate Royale (cream cheese frosting) and Classic (chocolate buttercream frosting on white cake). 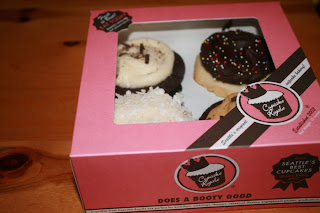 We had Fettucine Alfredo with plenty of asparagus and a big salad to contrast the cupcake consumption. And though the box says to eat the cupcakes the same day you buy them. We are having our second cupcake tomorrow. (probably). 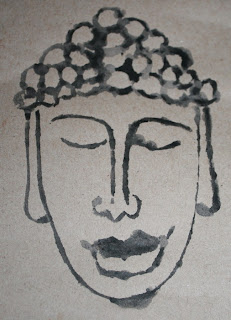 Working on the spiritual paintings a bit. This is the first try with my new handcut Buddha stencil.
Posted by celeste at 8:24 PM

hi celeste, i see on your wishbook list that you would like corey moortgats book, well it is your lucky day, lol..i have that book and would love to give it to you...
i have to find it of course, lol but when i do it is yours!!
see you soon!!
xo

YOu found Vupcake Royale. I love it. On weekends you can hardly get through there are so many people there.
You're lucky twice. If I find the Semiantis book I'll bring it for you.

When my daughter the baker moves back to Seattle, you will have to have one of her cupcakes. The cake and the frosting are so dellicious! I am glad that cupcake royale uses buttercream. I don't buy cake anywhere after eating my daughter's cakes. They always taste as good as they look!

Forgot to say that I love your stencil, I love the way you draw that figure.

Blogs I try to keep up with: